Edvard Moser, May-Britt Moser of the Norwegian University of Science and Technology (NTNU), and John O’Keefe, from University College London have been awarded the 2013 Louisa Gross Horwitz Prize for discoveries that have illuminated how the brain calculates location and navigation.

The Horwitz Prize is Columbia University’s top honor for achievement in biology and biochemistry research. It is widely considered to be a precursor to a Nobel. Of the 91 Horwitz Prize winners to date, 43 have gone on to receive Nobel prizes.

The researchers’ work, conducted in animal models, may lead to new treatments for Alzheimer’s and other neurological disorders that affect the brain’s spatial capabilities.

“How the brain records and recalls its trajectory through space is fundamental to understanding spatial memory,” said Nobel laureate Eric R. Kandel, MD, who is University Professor & the Kavli Professor of Brain Science, co-director of the Mortimer B. Zuckerman Mind Brain Behavior Institute, and director of the Kavli Institute for Brain Science at Columbia University and senior investigator at the Howard Hughes Medical Institute.

“We are pleased to award our 2013 Horwitz Prize to Drs. Edvard Moser, May-Britt Moser, and John O’Keefe for the significant advancements they have made to the field of neuroscience,” said Lee Goldman, MD, dean of the faculties of health sciences and medicine at Columbia University Medical Center and executive vice president for health and biomedical sciences at Columbia University.

“We are deeply honored” said Edvard Moser. “The award recognizes the dedicated work and cooperation of many great scientists over several decades. It also highlights how basic science contributes pieces to solutions that yield cures for diseases.”

“The Horwitz award is yet another acknowledgement of the scientific merits of May-Britt and Edvard Moser. Only the very best receive such an honor, and we at the Norwegian University of Science and Technology are very proud,” said Stig Slørdahl, Dean of the Faculty of Medicine at the university.

“John O’Keefe’s finding that part of the brain functions as a cognitive map was an important early milestone in the development of cognitive neuroscience, and the theoretical model of how the brain calculates its location—refined by Edvard and May-Britt Moser—is today a critical component of the study of hippocampal function,” said Gerard Karsenty, MD, PhD, chair of the Horwitz Prize Committee and of the Department of Genetics and Development at Columbia University Medical Center.

“The contributions of these three scientists to neuroscience make them worthy recipients of the 2013 Horwitz Prize,” said Michael Purdy, PhD, executive vice president for research, Columbia University. “Their theoretical insights—as well as the fact that John O’Keefe trained Edvard and May-Britt Moser in a research technique that became pivotal to their work—confirm the value of encouraging young scientists to connect with mentors in their field to learn technical skills and research strategies.”

In 1971, Dr. O’Keefe discovered specific cells in the hippocampus that record location. These place cells, as they are called, register the locations of specific landmarks, such as the laboratory, or the corner deli. While recording the firing of neurons in rats as they moved from one location to another, he found that each location was logged by its own unique set of nerve cells in the CA1 region of the hippocampus, suggesting that the cells form a virtual map of the animal’s location. The firing location of each cell was stable over time, and moving the animal to another location caused it to form a new map, using some of the same cells, in addition to new ones. When the animal was returned to its original location, it replayed the initial map that it had formed. 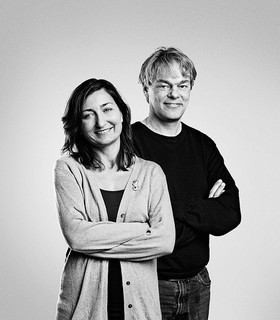 In 1996, Drs. Edvard Moser and May-Britt Moser, longtime collaborators who are married to each other, worked with Dr. O’Keefe, who became their mentor, to learn how to record the activity of cells in the hippocampus.

Nearly a decade later, in 2005, the Moser team discovered cells in the entorhinal cortex region in the brains of rats that function as a navigation system. These grid cells, as they are called, are responsible for the animals’ knowing where they are, where they have been, and where they are going; they are constantly working to create a map of the outside world. Constructed in the nervous system from tactile, visual, and other sensory input, grid cells have provided fundamental insights into how spatial location and memory are computed in the brain. The mapping information flows from the entorhinal cortex to the hippocampus and then back, and scientists are now working to understand how the grid cells inform place cells, and vice versa.

Because the entorhinal cortex, which contains the grid cell navigation system, is often damaged in the early stages of Alzheimer’s disease, the work by the Mosers and Dr. O’Keefe on how memory and cognitive ability are lost has great potential significance for Alzheimer’s research. Scientists think that these findings may explain why getting lost is frequently an early sign of Alzheimer’s and why memory fails as the disease progresses. Dr. O’Keefe’s group has already shown that the place cells in a mouse model of dementia are less accurate at identifying the animal’s location and that the magnitude of neuronal impairment correlates with deficits in spatial memory, as well as the amount of neuropathological amyloid plaque.

The 2013 Louisa Gross Horwitz Prize Lectures will be held on Thursday, Jan. 16, 2014, followed by an awards ceremony.

Fred Kavli, philanthropist and entrepreneur with links to NTNU, dies at 86

Time spent in bed, in a sitting position and on physical activity early after stroke