Fred Kavli, philanthropist and entrepreneur with links to NTNU, dies at 86

Fred Kavli, a businessman, entrepreneur and philanthropist whose support for basic scientific research has had a major impact on the research landscape in three continents, has died at 86.

Kavli died peacefully in his home in Santa Barbara on Thursday November 21, according to the Kavli Foundation, the institution he founded in 2000 to support his philanthropic work.

– Fred Kavli was an extraordinary human being with special visionary qualities. We are proud to represent his alma mater, and happy that we can carry his vision forward through the work of the Kavli Institute, said Gunnar Bovim, Rector of the Norwegian University of Science and Technology in Trondheim. 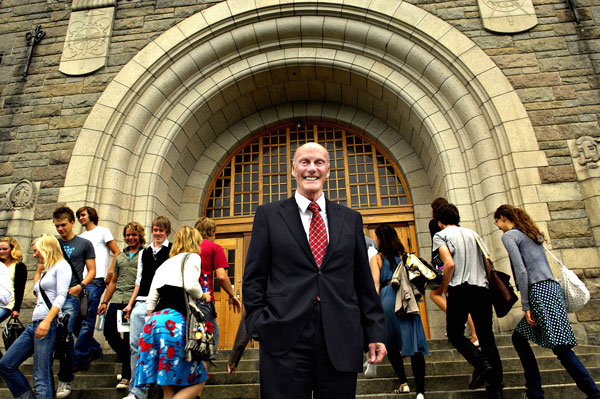 Kavli graduated with a degree in applied physics in 1955 from the Norwegian Institute of Technology, one of NTNU’s predecessors.  His philanthropic work through the Kavli Foundation has had a substantial impact on NTNU, particularly when the university’s Centre for the Biology of Memory was selected in 2007 to be the Kavli Institute for Systems Neuroscience.

– Fred has had an enormous impact on our lives. It is because of his vision that we have been able to conduct science as we wanted to do, and it is because of Fred that the institute has grown and become so successful, said Edvard Moser, director of NTNU’s Kavli Institute. – Fred’s beliefs in long-term investments and the power of basic science were unmatched. We will do our best to carry on his vision. He has established a secure foundation for that, through the establishment of the institute as well as the enormous support we get through the Foundation. The support of the Foundation serves as a model for other philanthropic organizations.

– It was with great sadness that we received the news that Fred had passed away, said Stig Slørdahl, dean of the university’s Faculty of Medicine. – Fred was a man with great vision, and even greater generosity, wisdom, creativity and a deep inner drive.

Kavli was diagnosed with cancer, about a year ago. He is survived by two children, and nine nephews and nieces.

After receiving his degree from NTH in 1955, Kavli moved to Canada and eventually the United States, where he became a naturalized citizen and established the Kavlico Corporation in Los Angeles in 1958. The company eventually became one of the world’s largest suppliers of sensors for aeronautical, automotive and industrial applications. The company’s products are found in such landmark projects as the SR-71 Blackbird and the Space Shuttle.

Kavli established the Kavli Foundation in 2000 after divesting his interests in Kavlico. Based in Southern California, the Foundation today includes an international community of basic research institutes in the fields of astrophysics, nanoscience, neuroscience, and theoretical physics.

The Foundation has also established and supported an international program of conferences, symposia, endowed professorships, and other activities. This includes being a founding partner of the biennial Kavli Prizes, which recognize scientists for their seminal advances in three research areas: astrophysics, nanoscience, and neuroscience.

Kavli was awarded an honorary doctorate from NTNU in 2008.