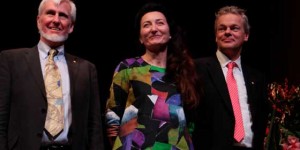 Nobel Laureates and neuroscientists May-Britt and Edvard Moser described how they made their prize-winning discovery in their Nobel lectures on Sunday 7 December. They also gave the audience a tantalizing glimpse into new findings, including the existence of speed cells in the brain, and how odours and memory are linked.

A “wow” ending of fog, jazz poetry and a tuba