A test based on play is being developed at NTNU to measure and analyse spontaneous hand use among children with cerebral palsy (CP). The aim is to contribute to better treatment, making everyday life easier. 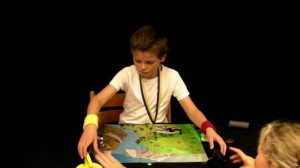 “We know little about the development of hand function among children with cerebral palsy affecting both sides of the body (bilateral CP), and there is little knowledge about which treatment works, and which doesn’t,” says occupational therapist and PhD candidate Ann-Kristin Gunnes Elvrum at the Department of Laboratory Medicine, Children’s and Women’s Health (LBK).

“The goal is to make their everyday life easier, making it easier to dress, play, participate in daily life and recreational activities. A large part of these children’s childhood is spent practicing various tasks, and it is therefore important that we know whether all this practice actually works.”

There are tests to measure the ability to for example grab hold of something on demand (capacity), but there are fewer methods to map the use of hands in everyday situations (spontaneous use).

A test based on play has been developed in Sweden to measure spontaneous use of hands in children aged 18 months to 12 years with one-sided (unilateral) CP. Elvrum and her colleagues at LBK and Karolinska Institutet in Sweden are now further developing this for children with bilateral CP.

During the test, children aged 18 months to 6 years are presented with certain toys demanding the use of both hands, and which they can play with at their own leisure. The older children (6-12 years) are given the same toys, but in a game-setting where they have to rescue a prisoner from a fortress by solving different tasks. The play session is filmed for later analysis.

“I have used the test on children with unilateral cerebral palsy, and most of them really enjoy it and think it’s fun,” Elvrum says.

To develop the test, Elvrum and hear team will film 120 children in Sweden and Norway with bilateral CP. 80 children have already been filmed in Sweden, and invitations will be sent this summer to 20-25 children in Sør-Trøndelag county, and 15-20 children at Rikshospitalet in Oslo and Vestfold County Hospital (Sykehuset i Vestfold).

The aim is to have filmed the children, analysed the results and developed the test for general use in 2013.