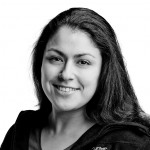 The work was performed at the CEMIR, NTNU and in CEMIR affiliated Professor Egil Lien’s lab at the University of Massachusetts Medical School. The results were recently published in The Journal of Biological Chemistry, 2015 Feb 6.

Inflammation is an initial response which is typically mounted by your body when it is under attack by infectious bacteria and viruses.  Macrophages and monocytes are cells in your immune system which are specialized to sense infection and important for activating the immune system. These cells express high levels of a group of proteins called Toll-Like Receptors (TLR)s. TLRs allow the macrophage to recognize invading infectious microorganisms quickly. Upon activation these receptors mount an inflammatory immune response which serves as protection during the early phases of infection.

My favorite TLR is TLR2 which is best known to recognize certain types of bacteria such as Staphylococcus and Mycobacterium. It can also distinguish structures found in viruses and fungi. TLR2 therefore plays an important role in recognizing invading microorganisms and in activating inflammatory signals which are important in fighting certain types of infection. TLR2 recognizes components of bacterial cell wall called lipopeptides. Lipopeptides that activate TLR2 are potent activators of the immune system and can be applied in vaccine development to enhance the efficiency of vaccines. In addition to sensing microbial components, TLR2 can be triggered by certain factors released from one’s own cells upon damage, in the absence of infection. So, although TLR2 is important to alert the immune system against invading microorganisms, excessive TLR activation can also contribute to inflammatory disease. The immune responses activated by TLRs therefore need to be tightly controlled to avoid the detrimental effects of excessive inflammation. 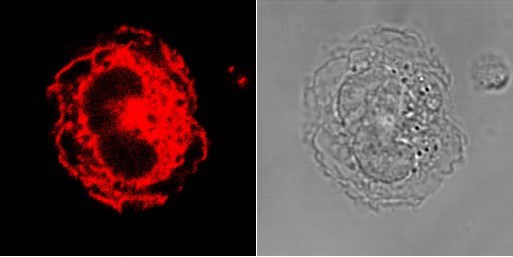 Toll-Like Receptor 2 (TLR2) in human monocytes. A human monocyte (right) and a confocal microscopy image of a human monocyte stained with a TLR2 antibody (red) (left) showing where TLR2 is expressed in the cell.

We have been studying TLR2 expression, regulation and signaling for a long time to try to understand how TLR2 shapes the immune response to invading microorganisms. We have previously shown that TLR2 is expressed on the surface of immune cells such as macrophages, monocytes, and that this receptor is quickly upregulated in response to very low levels of stimuli. Up-regulation of surface TLR2 may play a role in sensitizing immune cells to respond more potently to subsequent infection. We have also seen that TLR2 is expressed inside cells, in compartments called endosomes, and have further investigated the signaling pathways that control TLR2 expression and the immune response induced by different TLR2 activators.

All TLRs, except TLR3, require a signal protein called MyD88 to mount a pro-inflammatory response to infection. TLR3 uses a signal protein called TRIF which activates a signaling pathway that leads to a strong anti-viral response to viral infection. TLR4 has been the only TLR known to signal through both MyD88 and TRIF in macrophages, leading to the activation of both these pathways. We have shown now that TLR2 can also activate the TRIF pathway, in addition to the MyD88 pathway.

We found that TLR2 can indeed activate certain anti-viral responses and that the signaling protein TRIF is important for relaying these responses when TLR2 is activated. We also provide insight into other signaling proteins that are involved in this pathway. These results provide new insight into TLR activation and signaling and how the immune system deals with infection. This knowledge may aid the development of vaccines, as well as the development of drugs that control acute and chronic inflammation.

We are now investigating the role for TRIF in TLR2 signaling in human immune cells, since most of our studies until now have been conducted in mice lacking the genes coding for the different TLRs and down-stream signaling components. We are also investigating the role of TLRs in Multiple Myeloma, which is a cancer of certain immune cells in the bone-marrow called plasma cells. In close collaboration with the K.G. Jebsen Center for Multiple Myeloma Research we aim to determine how TLR activation affects Myeloma cell growth and survival, and hope to identify new ways to target TLRs and their down-stream signaling components in cancer therapy.

Reference: A Role for the Adaptor Proteins TRAM and TRIF in Toll-Like Receptor 2 Signaling, The Journal of Biological Chemistry, 2015 Feb 6.