A new method for gathering tissue samples from patients having undergone prostate cancer surgery is giving researchers better tools for understanding the mechanisms behind the disease, which affects more than 4000 Norwegian men annually. With time, it could lead to better diagnosis and more targeted treatment. 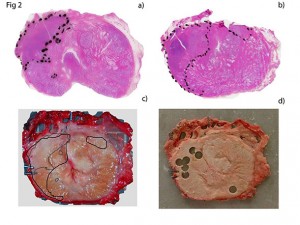 “Today there is no common consensus on how best to gather fresh tissue samples to understand the disease progression in individual prostate cancer patients,” says urologist Helena Bertilsson at the Department of Laboratory Medicine Children’s and Women’s Health (LBK), NTNU, and the Department of Urology at St. Olavs Hospital.

Bertilsson and her colleagues have found a new method for handling fresh tissue from prostate glands to study the genetics, proteins and metabolites. The goal is to understand the tumour’s biology and what makes cancer aggressive or not.

“We have developed a quick and simple method which preserves the tissue through quick freezing, at the same time as the fresh tissue is kept in a form that enables researchers to answer many research questions of high current interest. One should be able to easily adopt it in the laboratory and know exactly what types of cells are present in the sample – and one should be able to analyze not only genes, but also proteins and metabolites.”

The new method could also hold a key to a better understanding of prostate cancer. Through the use of magnetic resonance spectroscopy (MRS), the researchers have looked at the cancer cells’ metabolism and compared this with the cells’ DNA profile (gene expression).

We already know that the level of the metabolite citrate is lower in prostate cancer cells, whereas the level of choline is higher. What we do not know so much about is why. Bertilsson has therefore studied these variations together with genetic data to see if and how they correlate.

One of the findings is that although some genes may seem very important in isolation, it is not given that they are the genes that actually impact the cancer cells’ ability to grow and spread. By comparing metabolic differences with genetic variation, different genes can emerge as important – genes that otherwise might have been dismissed as unimportant.

This is something Bertilsson wants to study further:

“This is what makes research fun – new ideas are formed all the time! It is something I would like to look more into in an animal model. What if we blocked this gene? The hypothesis is that the tumour would decrease and that we would see this as a reaction in the metabolite citrate.

“We will also look more at the genetic data, as we have only scratched the surface,” Bertilsson says.

This is something that could lead to more targeted treatment in the future.

The method developed at LBK also applies to other forms of cancer, such as kidney cancer, testicle cancer and breast cancer. There is also an on-going pilot study for intestinal cancer.