The Hertie Foundation in collaboration with the Federation of European Neuroscience Societies (FENS) has awarded the 2015 Eric Kandel Young Neuroscientists Prize to the physicist and neuroscientist Yasser Roudi from the Kavli Institute for Systems Neuroscience and Centre for Neural Computation, NTNU, Trondheim, Norway. 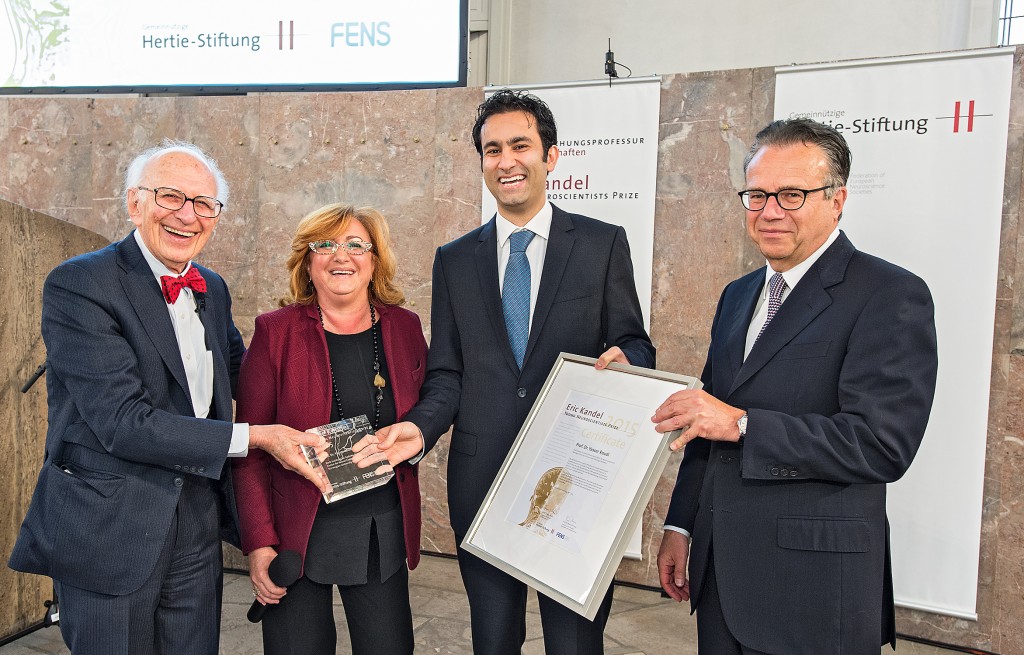 The award which is named after the 2000 Nobel Laureate Eric Kandel “recognizes the work of outstanding young scientists in the field of neuroscience and helps advance their careers as researchers” and according to FENS website “is the most prestigious award for the next generation of top neuroscientists in Europe.” Prof. Roudi has been awarded the prize “for his contributions to the applications of statistical physics to network reconstruction and the understanding of information processing in neuronal networks.”

A major theme of Prof. Roudi’s research is understanding the computational mechanisms and algorithms involved in statistical inference and learning, and the possible implementation of such mechanisms in neural networks. Recently, in collaboration with Profs Edvard and May-Britt Moser, who won the Nobel prize in Physiology and Medicine this year, he has made important contributions to our understanding of the network mechanisms underlying the mammalian spatial navigation and memory system. According to Prof. Edvard Moser, “Yasser is one of very very few young researchers who is internationally recognized and active in both the neuroscience and the theoretical physics communities. By keeping a foot in both camps, he contributes significantly to the interaction between physics and neuroscience.” Prof. May-Britt Moser says that “I am impressed by Yasser’s ability to explain brain computation by fundamental laws of physics that may apply as well to non-living matter as to the nervous system.”

Yasser who is now 33 studied Physics at Sharif University of Technology in Tehran, obtained his PhD from SISSA, Trieste in 2005 and before becoming a professor at NTNU, has worked at Nordita, The Nordic Institute for Theoretical Physics and the Gatsby Unit, UCL, one of the leading centers for computational neuroscience and machine learning in the world. His previous awards include the Bogue Research Fellowship (UCL), the Burgen Scholarship from Academea Europea, the Royal Norwegian Society of Sciences and Letters young investigators award and the Norwegian Academy of Science and Letters’ Nansen prize for young scientists. Prof. Roudi is also a Corresponding Fellow at Nordita and a Research Staff Member of the International Centre for Theoretical Physics (ICTP) in Italy.