Presidential Lecture in Chicago with a newly created video

When May-Britt Moser gave her Nobel Prize lecture last December, she wowed the audience with a series of specially created videos designed to help visualize different aspects of brain research, from how our sense of smell helps bring back memories, to the mystery and excitement of discovering patterns in the data she and her colleagues at the Kavli Institute for Systems Neuroscience/Centre for Neural Computation collect in the laboratory. 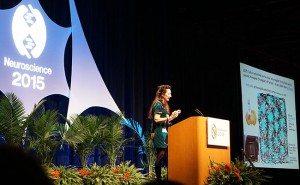 When Moser gave the last of four Presidential Lectures late last month at the annual Society for Neuroscience meeting in Chicago, she used the same approach, but this time with a newly created video entitled “My Running Rat.” The Presidential Lectures are the highlight of the conference, which this year attracted more than 30,000 attendees from 80 countries.

Moser’s talk was entitled “Grid Cells and Cortical Maps for Space”, where she described the medial entorhinal cortex and its role as part of the brain’s circuit for dynamic representation of self-location.

May-Britt Moser and her colleague Edvard Moser were awarded the 2014 Nobel Prize in Physiology or Medicine along with their mentor and colleague John O’Keefe “for their discoveries of cells that constitute a positioning system in the brain.” The Mosers were recognized for their 2005 discovery of grid cells, and for their subsequent research that showed how place and grid cells make it possible to determine position and to navigate.

The music in the “My Running Rat” video builds on the sound of grid cells firing in the rats that the Mosers and their colleagues use in their research. It features two running rats, Gjertrud and Hjørdis, which are used by the Kavli Institute not for research but as pet rats, for photo shoots and to show to journalists and visitors. The rats, running hither and yon, and at one point trotting along on a rat-sized treadmill, are visualized in an artistic and abstract way.

While the video is fun for non-scientists to see, neuroscientists will recognize many of its elements, from the crackling noise that is the sound of rat neurons firing, to the distinctive visual pattern that gives grid cells their name.

Composer Bertil Palmar Johansen translated the spikes and EEGs measured from the entorhinal cortex of a rat to make the music for the first sequence in the video. The measurements are from a rat that is running and then sleeping, and finally from when it wakes up and starts running again. May-Britt Moser also used her lecture to present unpublished research from the Kavli Institute, including results showing that speed cells are found in the brain stem, and that grid cells are shaped in part by experiences that occur during the first weeks of life. May-Britt said that the experience “was just fantastic,” and that she was so proud to talk about the amazing data from the lab.

Read the full story on the new video in an interview with May-Britt Moser,the composer Bertil Palmar Johansen and film director Johan Magnus Elvemo on Gemini.no.

The lecture and the video were a great success, and the Twitter feed from the presentation suggests she wowed the roughly ten thousand people who chose to spend the afternoon listening to her talk.

“Beautiful talk by Nobel laureate @MayBrittMoser at #sfn15,” tweeted Elizabeth Buffalo, a neuroscientist and head of the Buffalo Lab at the University of Washington. “The artistic collaboration was fantastic!”

Kia Nobre, director of the University of Oxford’s Oxford Centre for Human Brain Activity (OHBA) tweeted her experience this way: “Nobel Laureate May Britt Moser at #sfn15 – we are scientists & scientists like to play. Indeed beautiful work by a deep & vibrant scientist.”

Anahita Hamidi, a PhD candidate in the University of California Davis Neuroscience programme, devoted an entire blog post in her blog “Genetic Expressions” to the talk and to the Mosers research. Under a picture of a quote from the talk, “Scientists are like children, and they like to play,” Hamidi wrote, “This stuff blows my mind.”

“MayBrittMoser’s talk is easily among the best lecture I’ve attended,” tweeted Nagaraj Mahajan, a PhD candidate at Johns Hopkins University. “The grid cell music mashup was just as cool as her!! #sfn15”

Health Challenges in a Syrian refugee settlement in...