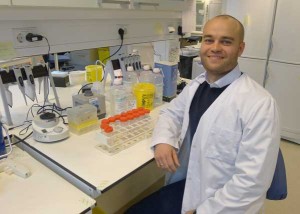 On Friday 6 February, Eivind Ottersen Samstad from CEMIR research centre defends his doctoral thesis. He has been researching crystalline substances in the human body, such as quartz, cholesterol and uric acid crystals.

– The immune system is activated when the body attempts to get rid of these crystals, but sometimes our bodies react the wrong way. The response is so powerful that it causes damage to cells and tissue, Samstad explains.

This can cause diseases like pulmonary fibrosis, gout, heart attack or stroke.

Through their research, Samstad and his colleagues have attempted to understand the mechanisms in play when the immune system overreacts and in fact causes disease instead of preventing it.

Samstad started his research when he was still a student in the NTNU Research Programme, and continued his work at CEMIR. In addition to his research, he has lately been working as a doctor at Ålesund Hospital.

CEMIR was started in 2013 and was awarded Centre of Research Excellence (CoE) status by the Research Council.