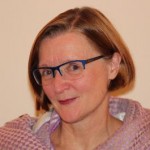 Breast cancer is a disease of the milk-producing glandular cells, the ductal and lobular cells of the breast. In order to survive, cancer cells need nutrients, support and an environment that they thrive in so that they can grow, multiply and spread. At an early stage, cancer cells establish a close dialog with the tissues and cells that surround them. They encourage blood vessels to develop in order to supply them with glucose and oxygen and they stimulate cells in surrounding tissue, stromal cells, to build a scaffold that can support the growing population of cancer cells.

This close communication between cancer cells and their microenvironment and the ability of cancer cells to remodel their surroundings according to their needs, is acknowledged as a vital part of the development of a tumour.

The normal glandular structures of the breast are embedded in a connective tissue stroma that supports and protects the glands in both the resting state and during lactation. This supportive tissue is part of the dynamic microenvironment of the breast. In breast cancer tumour cells develop the ability to modify the connective tissue cells nearby in order to obtain nutrients and to enable the cancer cells to invade adjacent tissue. Indeed, some tumour cells are so adaptable that they themselves can transform from glandular or epithelial cells into stromal or mesenchymal cells. This phenomenon is called epithelial-mesenchymal transition (EMT) and is essential for the development of a tumour.

Much research is being done on the molecular aspects of tumour development, connective tissue changes and EMT. The Breast Cancer Subtypes research group wanted to investigate whether it was possible to identify any changes in connective tissue fibre patterns within the tumour and at its edge compared to normal tissue.

The study was carried out on a small number of cases of breast cancer, but the complexity of the microscopic examinations and the numbers of images necessary for analysis were considerable.  Brabrand and Kariuki became a regular sight at the Department of Physics as they exploited all available time slots in the lab and they frequently worked hard into the night analysing their results.

The outcome of their work was well worth the effort. They discovered that collagen fibres in the tumour microenvironment undergo different changes dependent on whether they are inside the tumour or at its edge. They found that cancer cells induce structural changes in the stroma that are beneficial to themselves.  In normal tissue the fibres are wavy and look a bit like angels’ hair. In the middle of the tumour, the fibres are very straight but lie in a criss-cross pattern. At the growing edge of the tumour, however, they found that the fibres are parallel to each other making a kind of railway track along which the cancer cells can migrate into the surrounding tissue. 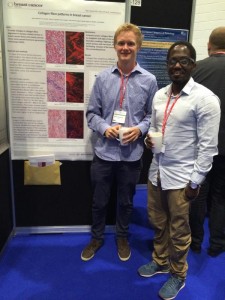 Kariuki and Brabrand were awarded a travel stipend for their work by the Oslo Breast Cancer Consortium (OSBREAC) in 2013 and they used it to participate in the 26th European Congress of Pathology in London, 2014. Their findings were published this year.

At present Magnus Lilledahl is developing a method that will allow more rapid processing of tissue samples in the laser microscope and the research group plans to study collagen fibre patterns in a larger number of samples of breast cancer. This collaboration between the world of physics and the world of pathology has contributed to our knowledge of the effect of cancer cells on their environment. However, none of it would have been possible without the efforts of two medical students who were willing to give up a good night’s sleep for the sake of science.

This meeting between the world of physics and the world of pathology could contribute to our knowledge of the effect of cancer cells on their environment.