Lessons learned from a local hospital after the Nepal Earthquake

My personal experience from the Nepal Earthquake in 2015, and lessons learned from Dhulikhel Hospital (DH).

It was a beautiful Saturday (25 April 2015) with the clear blue sky, the only day we get off from the work. I was in my room working on my laptop, and my husband sitting nearby me watching the television. Middle of the day at 11:56, I felt a shake, and then I immediately turned towards my husband. We were silent for a second; he told me that it is an earthquake.

He ran out and asked me to run with him. I was unable to move for a few seconds then I tried to hide under the bed instead of running out. I was seven months pregnant expecting our first baby in July.  My husband came back to take me out. I could hear people screaming and running to the safest place that they would think of. My family and I was safe and our house was still standing.

Within an hour after this first quake, the ambulances, motorbikes, trucks, cars or any kind of transport system that were available started rushing towards the hospital. Some of the victims were even carried by their family members & neighbors with some heavy bleeding. I was living in a few minutes distance from the Dhulikhel Hospital (DH). DH is one of the tertiary level hospital for the Kavrepalanchok district and for few other neighboring districts.

Most of the regular health facilities were closed because of the weekend. My husband decided to go to the hospital the first day. After a while, I received a phone call and it was my supervisor, Professor Erik Solligård, who was asking if we were safe. I was very happy to hear him.

We were outside the whole day. I was very scared to go back to the house and the same feeling was with my family members and my neighbors. We bought some dry foods from the local shops and spend that night in a public bus that was parked in the bus station. We spend our nights outside under the tents and sometimes inside the bus for almost a month after the first earthquake.

I started to go to the hospital from the second day to help in the areas that I could. Personally, I also felt more safe being in the hospital and making myself busy. I usually started my work from 8:00 in the morning until 20:00 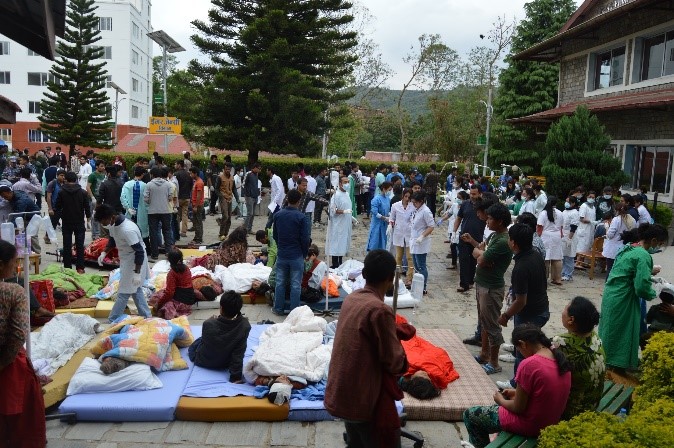 Second day of the earthquake in front of the main hospital building. Photo credit: Dhulikhel Hospital

Triage zone established at the main entrance of the hospital

DH located in one of the most earthquake-affected districts of Nepal started providing 24 hours health services from day one to the earthquake victims. The hospital set up immediate medical direction, 24-hour surgical services, infection control teams, and logistical management teams, who had a vital role in managing unexpected workloads and providing efficient and quality health care.

One of the major task force was the establishment of triage zone at the main entrance of the hospital consisting of medical team and volunteers. We started a systematic screening of patients arriving at the hospital using a simplified triage system, and prioritized patients for effective surgical services. We used color ribbons (red, orange, yellow and green) to distinguish the patient according to the severity and were treated in respective treatment zones. This was evaluated as a useful tool by the staffs at the hospital. I believe this is a great example of teamwork in a local hospital with dedicated staffs working 24 hours prioritizing their profession and humanity rather than their family. On the other hand, collaborations between the two institutions could deliver the quality of health service to the people on right time.

At the same time, I was collecting the patient information from the triage zone and the treatment area. I thought this would be useful to report for the future preparedness in similar disasters. I find very challenging to have patient’s information during this emergency phase because the situation was very emotional, hospital had large number of caseloads, and in the first few days the hospital was not able to establish the systematic patient registry system. My two dedicated and hardworking research nurses helped me to accomplish this tremendous work.I still remember, the second day after the earthquake when I was in the hospital, the number of earthquake injuries escalated in the hospital, all the beds and almost all the space in the courtyard was occupied. The working conditions were continuously demanding. No one was prepared to deal with such a large number of injured patients.

This was Nepal’s first experience in responding to a major disaster almost after eight decades and DH had never been the first-line health care provider after an earthquake. However, the hospital was in the process of improving emergency health care through the “Dhulikhel Hospital Patient Care (DHPCARE)” project, a collaborative project initiated in 2013 between DH, the Norwegian University of Science and Technology (NTNU) and St. Olav’s Hospital, University Hospital Trondheim, Norway [1].

The main interventions in this project were the introduction of a systematic emergency registry, a systematic triage system, and simulator training among health personnel in the emergency department (ED). As part of the project, the ED was reorganized to separate patients into three treatment zones (red, orange/yellow, and green) according to four triage categories (red, orange, yellow and green), with separate staff attending each zone since Feb 2015. I was the coordinator from the DH in implementing the project.

The scariest moment I ever experienced in my life

On 12th of May where things were more stable, I was at the hospital gate collecting the patient’s information. At 12:50 during the middle of the day, we experienced the second biggest shake. That day, my husband with the team was travelling to one of the outreach center of the hospital to investigate the earthquake damage and to identify the possibilities to start the health services. Afterwards I heard in the news that the place he went was the epicenter of that hit. I started to call him in his mobile, the phone was not reachable. Then I started to seek help of police if they can reach someone from that place, they tried to help me but the phone to the local police was also not reachable.

Afterwards the news were creepier, I heard people talking with worry that there are many casualties who were trapped by the landslides on that road where my husband was supposed to be traveling at that time. In few minutes, the number of patients arriving to the hospital increased. I was completely paralyzed. Few hours had passed but I have no updates, I was losing my hope but I have no other option than just to wait and try to reach him in his mobile. At around 16:30 I had a call in my mobile from a new mobile number. I was very scared to receive that call but I picked that phone call. I heard “Hello Samita”, it was my husband. I was speechless; I said “how are you and where are you?”. He told me that he is fine and he is in safe place. I just wanted to see him as soon as possible. He was later rescued by the army helicopter.

What we know and what can we learn from a local hospital?

We know that the earthquakes have a devastating impact on people lives, economy and the medical infrastructure. However, the impact of earthquakes has been reported to be highest in low-resource settings where health facilities are often damaged and the emergency response capacity is reduced [2, 3]. Disaster preparedness is a key element to resilient health systems [4, 5]. Although, considerable effort has been devoted to better disaster planning [6], there is still little evidence to support disaster planning and disaster risk reduction activities in low and middle-income countries [5, 7]. A national strategy for disaster risk management in Nepal does not include a separate plan for each type of disasters. Reports have stated that the national health information system of Nepal lack injury details from the earthquakes [8, 9]. The national disaster policy was often limited to the paper and was independent to the evidence [8, 9]. This can result in inadequate management of the patients.

DH provided emergency health services to more than 2,000 patients. The caseload was unexpected and was almost five times higher during the first five days than the pre-incident daily average. The majority of injuries were lower limb fractures and over 100 severely injured patients were treated. The proportion of severely injured and in-hospital deaths were relatively low indicating that the most severely injured did not reach the hospital. Most earthquake-affected regions in Nepal were rural and mountainous and there was continuous landslides, which affect transportation and prevent timely access to health facilities. The burden of emergency cases was high before the international field hospitals could be established. The international medical teams need some days after a disaster to initiate their services in the disaster affected areas. Until they arrive, patients are often treated by the poorly developed local health system, and many severely injured likely die prior to receiving medical treatment. Our study result and the local hospital experience underline the importance of developing own consistent and robust local health services capable of managing natural disasters such as an earthquake.

I am a PhD student at the Medical Faculty at NTNU under the supervision of Erik Solligård and Kari Risnes who are the project leaders in the DHECARE project. We present the experiences from DH including follow-up of earthquake victims in the article “Impact of 2015 Earthquakes on a local hospital in Nepal: A Prospective Hospital-based Study” in PLOS ONE, February 2 2018.

Can hybrid PET/MRI improve the diagnostic accuracy of brain glioma?