Today, Second harmonic imaging is a preferred ultrasound imaging modality, mainly due to its ability to improve image quality by suppressing undesired acoustic reverberations (Averkiou et al, 2000). This imaging modality improves the diagnostics for different medical applications. Most of the cardiac ultrasound scanners in the hospitals use this method. The principle is as follows: the scanner transmits an ultrasound pulse at a specific fundamental frequency (f0). Then, nonlinear propagation in human tissue generates a second harmonic signal component at double the fundamental frequency. Finally, echoes at the second harmonic frequency (2f0) are received and used to construct the ultrasound image.

In our research project, we established an experimental measurement system to measure, manipulate, and optimize excitation waveforms for second harmonic imaging. One of the goals is to reduce the undesired transmitted second harmonic signal to below -30 dB of the fundamental frequency signal. An optimization procedure was used to automatically measure and compensate for the undesired nonlinearity in the transmit system, finding a pre-distorted controlling electrical excitation waveform that produces an ultrasound transmit pulse without second harmonic signal components.

The optimization framework is illustrated in Figure 1. Transmitted ultrasound pulses were measured in a water tank using a hydrophone, which is an underwater microphone. The pulses were measured close to the transducer surface, at a distance of approximately 3 mm, before harmonics from nonlinear propagation in water had developed. A computer program first evaluates the second harmonic signal content in the measured pressure pulses, then runs an optimization algorithm to refine the input excitation waveform, to subsequently send it to the ultrasound scanner via a network connection. The scanner uses this new waveform to transmit a new output pulse (y) which was again measured with the hydrophone. This procedure was repeated for a preset number of iterations. 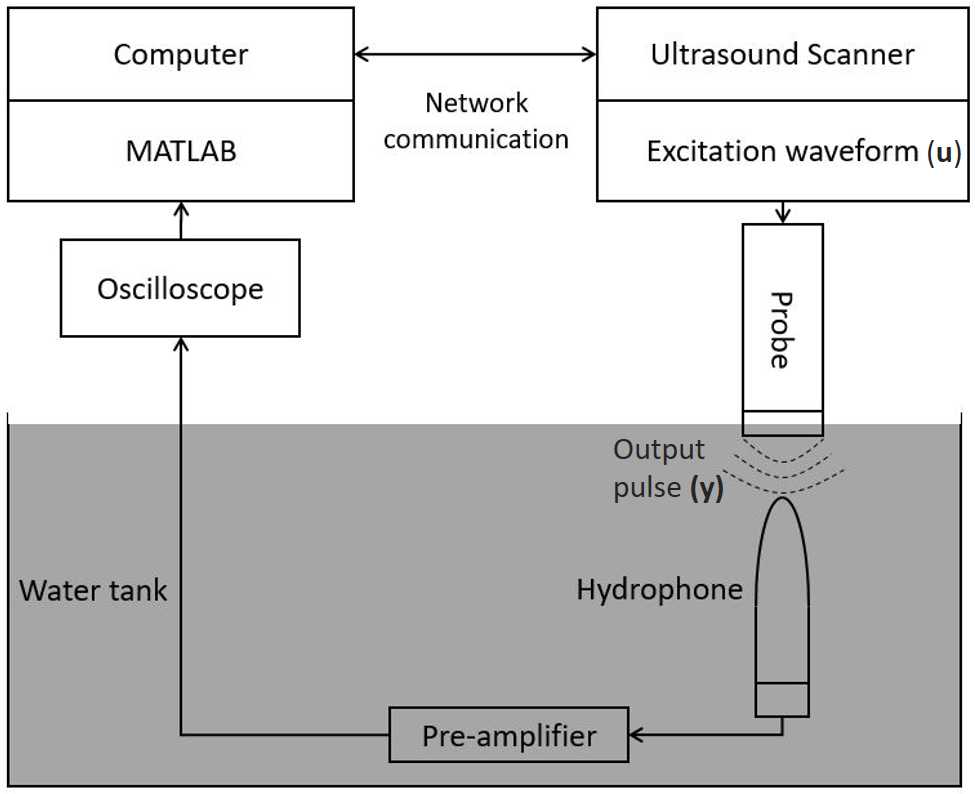 Schematic set-up of the acoustic measurement system. An excitation waveform (u) is defined in the ultrasound scanner to drive the probe. The resulting ultrasound pulse (y) is measured by the hydrophone, digitized, and evaluated using Matlab. From this evaluation, a new waveform (u’) was defined using the optimization algorithm, which was subsequently transmitted to generate the new output pulse (y’). This process was then repeated a pre-set number of iterations.

The method was applied to optimize for two different set-ups: one with an ultrasound transducer electrically driven by a 3-level pulser, and one with another transducer type that was driven by a 31-level pulser. Figure 2 shows the electrical input and pressure output pulses for both set-ups in the frequency domain. As an illustration, these results are compared with two typical excitations with the same pulse length: a 2-cycle square wave for the 3-level pulser and a Gaussian-modulated sinusoidal wave for the 31-level waveform. Using the excitations found by this method, the measured transmitted second harmonic levels are 40 dB and 30 dB lower than the fundamental for the 3-level and 31-level pulser respectively. Moreover, the second harmonic level is about 15 dB lower, which is better, than the two typical (uncompensated) excitation waveforms.

Frequency spectra of the optimization results for a 3-level waveform (upper row) and multi-level waveform (bottom row). The optimized waveforms (red) were compared with the waveforms from two typical excitation waveforms (blue). The left figures (a,b) are controlling input waveforms for the scanner while the right ones (c,d) are the output acoustic pressure measured by the hydrophone.

Lessons learned from a local hospital after the Nepal Earthquake