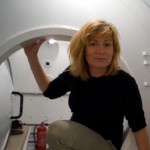 White blood cells are essential components of the immune system. Without these cells we would not stay healthy for long on a planet where infections thrive. But what are these cells up to when we’re not sick? They are present. And they are active, at all times.

Lean back and breathe in. Hold your breath. It can’t get much easier; what could there possibly here for a scientist to study? Well, there is something.

Evolution has shaped us for the environment we live in, and our environment is never completely static. The immune system is involved in rapid biological adjustments that protect us from harm caused by environmental perturbations. Some perturbations are of a cyclic nature, like those that are linked to the earth’s rotation around the sun and its own axis. In an elegant study published in the journal Nature in 2015, English and German scientists identified variations in the immune system that are perfectly aligned with the seasons. Actually, our bodies appear to lie slightly ahead of the seasonal changes: we appear to have a biological memory that fine-tunes the immune system just before the seasons change. Since many common infectious diseases appear in a seasonal pattern, this is an amazing adaptation for life on planet earth. If we speed the cycle up a bit, related effects have been observed over the 24 hrs cycle.

What happens if we speed it up to the cycle of our breath?

Most of the time, we breathe without thinking about it. Our cells need oxygen for energy production, and once we have filled our lungs with air, it is the circulatory system – i.e. the heart, blood vessels and blood – that distributes oxygen to the cells in all parts of our body. We can all voluntarily hold our breath for a while, but some people do this better than the rest. Freedivers dive while holding their breath; the best of them can hold their breath for over 10 minutes. 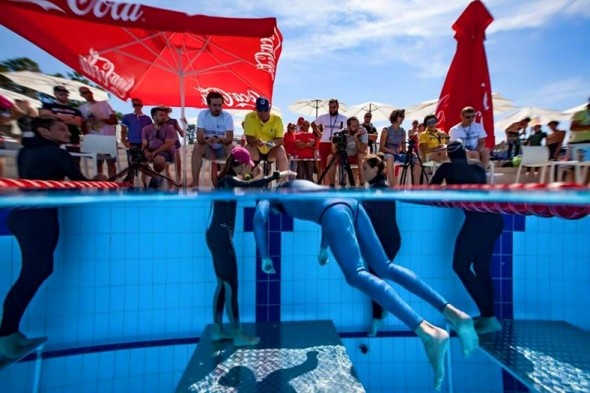 Eleven-time free-diving world champion Goran Colak during a bout of static apnea; timed breath-holding while immersed in water .We have used blood samples from elite free-diving athletes to examine how white blood cells of the immune system responds to acute reduction in blood oxygen levels. The photo is used with Goran Colak’s permission.

In order to understand how white blood cells respond to an altered breathing pattern, we studied some of the world’s best free-diving athletes. We used a simple design: blood samples were drawn from contestants at an international free-diving competition before start, and then again one and three hours after completion of a series of dives where the athletes either lay face down in water or swam close to the surface for as long as they could.

Then the samples were transported to the NTNU Genomic Core Facility where total gene expression in the athletes’ white blood cells was measured by a method called full genome microarray analysis. The analysis results were striking: the activity of more than 5000 genes changed in response to the simple effort of breath-holding. This is almost ¼ of all genes found in human cells. With this amount of data we could dig deeper into cellular biology and calculate which specific types of white blood cells that reacted to breath-holding, and also see finer details in the biological processes going on within the cells. 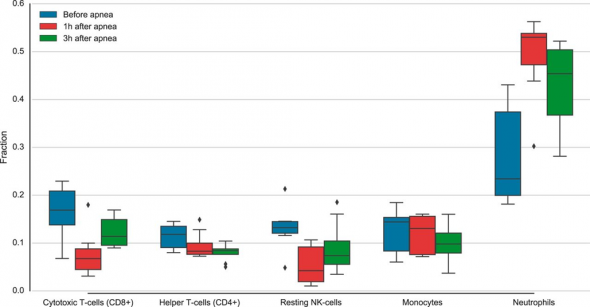 The figure shows a selection of white blood cell types in samples taken from athlete free-divers. Blue boxes are cell amounts prior to diving, whereas the red and green boxes show the same cells one and three hours after diving. The main changes identified were a marked increase in the amount of neutrophil granulocytes, whereas two types of lymphocytes; CD8-postivie cells and natural killer (NK) cells, decreased. Calculations of relative amounts of specific white blood cell types were done by mathematical deconvolution of global blood gene expression data.

The most striking finding we did was a marked increase of the white blood cell type neutrophil granulocytes. These blood cells are programmed for rapid response when the body perceives attacks from intruders; the neutrophils are capable of killing invading cells simply by eating them. But they also have another interesting trait that emerges when oxygen levels drop: neutrophil granulocytes are evolutionary old-timers that stem from an era when the atmosphere contained less oxygen than now, and their modern offspring still prefer environments where the oxygen levels are low. White blood cell types that use more oxygen – like lymphocytes – were less active in blood drawn after the athletes held their breath. What we observed are likely to be traces of evolutionary history still embedded in our immune system, visible when oxygen levels change. The study was published in November 2016 in the journal Physiological Genomics.

This study was done on healthy athletes.

Can it be relevant for understanding of human diseases?

Healthy people normally don’t have to worry about oxygen, but for common diseases like chronic obstructive lung disease (COPD) and sleep apnea, the body’s oxygen supply is limited. These diseases are associated with persistent inflammatory conditions, and increased risk of infections; both indicative of an impaired immune system. If we can use data from healthy individuals to distinguish secondary effects of low oxygen levels from the primary pathology of the disease, this may in turn be helpful for prevention and treatment strategies.