Blogger: Wadi Mawad, Paediatric cardiologist at the Hospital for Sick Children in Toronto, Canada, and PhD-candidate at the Centre for Innovative Ultrasound Solutions (CIUS), NTNU, and Siri Ann Nyrnes, Consultant physiciant at St. Olavs Hospital and Researcher at CIUS.

Using a new ultrasound technique, we have been able to visualize and measure how efficiently blood flows through the heart chambers in young children with congenital heart disease. We studied 37 children aged two weeks to 10 years, and among the 26 children, which had congenital heart disease, we found less efficient hearts, meaning they use more energy than a normal heart. The technology, known as blood speckle tracking, has been developed by our colleagues at CIUS.

Predicting these events and intervening preventatively has been the focus of much work but remains challenging, with cutoffs of ventricular volumes measured by cardiac MRI constantly being changed. Lung artery replacement has been shown to procure some symptomatic relief, however, no survival benefit has been demonstrated. Given this realization, we can wonder whether ventricular volumes are really the best guide to optimally time surgery for these patients or is there a better avenue?

It has been suggested, from foetal life and beyond, that the shape and size of cardiac structures change in response to changes in blood flow patterns. These flow patterns are now within the reach of a new echocardiographic imaging technique combining high-frame-rate imaging of clusters of red blood cells. The resulting images open a window into the disturbed flow patterns of these patients. Abnormalities in flow result in ventricular inefficiencies and energy-losses which can now be quantified and localized using custom software, PyUSview. This analysis tool is the result of a tight collaboration between the clinicians and engineers in our group lead by Lasse Løvstakken at CIUS. 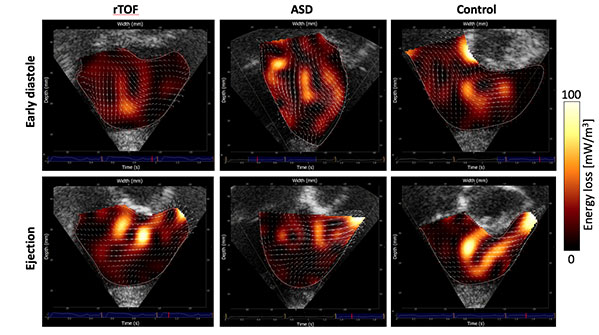 Using PyUSview, we studied a group of patients with repaired tetralogy of Fallot with severe lung artery leak (15 patients). We compared them to a group with another type of congenital heart disease, atrial septal defect (ASD) (communication between the upper chambers of the heart; 11 patients) and 11 healthy controls. We calculated energy-loss in the right ventricle during contraction (systole) and relaxation (diastole) and found that energy-loss in diastole was similar for both groups with congenital heart lesions, but significantly higher than controls.

A most interesting finding came from inspecting the location of maximal energy-loss, with marked differences between the groups (Figure 1). In the ASD group, the pattern of energy-loss was similar to that of normal controls. In the repaired tetralogy of Fallot group however, there was an additional area of increased energy loss at the right ventricular apex, corresponding to the collision of blood leaking back from the lung artery and the blood coming in normally to the ventricle during filling.

This is the first study of ventricular energetics in a paediatric population with dilated right ventricles. The methodology behind the imaging, its planned integration into the newest release of the GE Vivid E95 scanner as well as our results were presented by our group at the 2017 American Society of Echocardiography meeting (Pic 1-4).  Although the clinical significance of these findings is not yet clear, ventricular energetics, as assessed by echocardiography, may become a valuable tool in developing an approach based on blood flow patterns and energy-loss calculations to select a more optimal time for intervention. 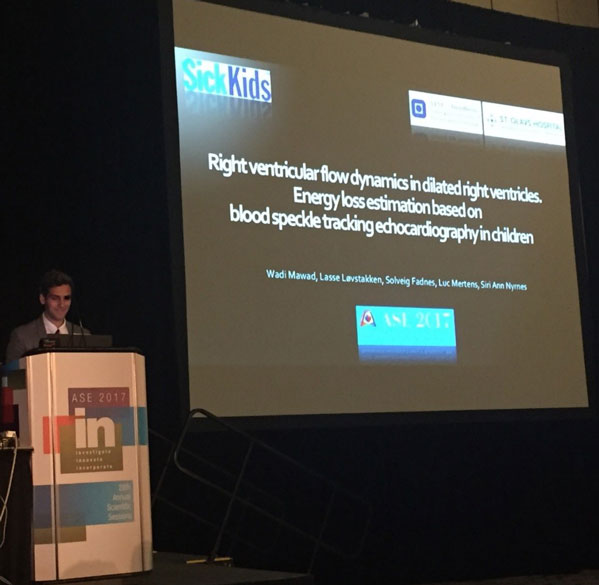 Wadi Mawad was awarded a top 25 investigator prize for his presentation at the ASE-meeting 2017.

On EU: Forget the framework – look to...