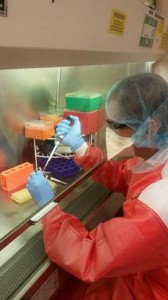 It took almost six months for Egil Lien to get permission from the Federal Bureau of Investigation in the US to study the plague bacteria that, in its time, killed half of Norway’s population. Now, an antibiotic-resistant strain of the bacteria has been found.

As the bacteria responsible for killing a large part of Europe’s population during the Black Death, the plague bacteria Yersinia pestis has a long kill list on its conscience.

Shutting off blood supply to an extremity to protect the heart