When people think about breast cancer research, the first thing that comes to their mind is the picture of these people in white coats, for whom I have of course a great respect, experimenting with new drugs, new treatments and any possible way to treat and cure this disease.

This is of great value and many lives have been saved thanks to these developments, yet there is another kind of research going on in the field. This research is based not in treating the tumor but in detecting it, and that is one of the focuses in our group, the MR cancer group at the Department of Circulation and Medical Imaging.

MRI is the short name for Magnetic Resonance Imaging. The first picture that might come to your mind is this big bore machine, and if you have never seen it in person, you would at least have heard about it in TV shows like House or Emergency Room. 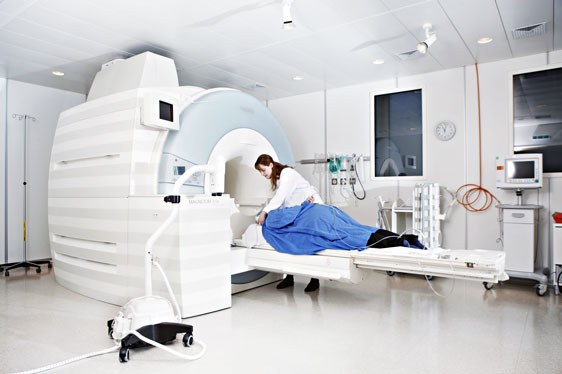 MRI for breast cancer is an emerging technology. So far, in the clinic it is used for screening of patients at really high risk, such as patients with genetic mutations (does Angelina Jolie ring any bell?), or for evaluation of inconclusive findings in mammograms or ultrasound exams, as well as for monitoring specific cases of locally advanced breast cancer.

So far, these MRI examinations require the injection of a contrast agent to the patient’s blood. But this scenario could be about to change, as the researchers at the MR cancer group, and several other groups in the world are developing new advanced MRI techniques.

The technique I am talking about it is called Diffusion Weighted Imaging, and it has its origin in detecting areas in the brain affected by strokes. This is a powerful technique, but how does this Diffusion ‘thing’ really work? Actually it has been in front of our eyes for a long time and it was already described by Einstein (I mean the concept of Diffusion, of course not its application to MR). Just get a glass of water and drop some dye in it (orange juice or wine will make it as well). The dye will start coloring all the water starting from the dropping place, and this is happening because the water molecules of the dye (yes, everything is water in a high percent, even us and here it is the point) are moving. So, the concept is that the water molecules in any fluid will be moving freely as long as there is nothing to prevent them to do so.

Now, repeat the experiment introducing plastic balls full of water in the glass and you will see how the dye cannot move into the water inside the balls, now there is a barrier an there will be less diffusion in the glass, diffusion (freedom of water molecules to move) has been restricted.

Now, let’s go back to the breasts… In a healthy situation the water in your cells, extracellular fluid, fluid (or milk) in your ducts will be moving according with the natural structures of your breasts. The water will have a natural freedom to move and will be restricted by natural barriers, so its diffusion will be in a certain ‘healthy’ range. But then, if the bad guys (cancer cells) start invading those structures and reduce the freedom of the water, the scenario is changed. The water molecules can no longer move in the same way because the environment is invaded (that is why we call tumors ‘invasive’) by hordes of malignant cells.

Water diffusion recreation from MRI data. Each ellipsoid represents the distance traveled in average by an imaginary water molecule situated in the center of the voxel. Red arrows point out an area of low diffusion (invasive ductal carcinoma). Blue arrow points out healthy tissue with healthy range of diffusion. Blue arrow points out a too high diffusion area (tumor necrosis).

Going back to the technique, what Diffusion Weighted Imaging does it is to use the power of MRI technology to measure the diffusion of water molecules within tissue and look for values out of the normal limits. Physical models are used to help with this task, and two important ones are diffusion tensor imaging (DTI), that looks at diffusion in specific directions; and intravoxel incoherent motion (IVIM) that takes in account that water in blood will be naturally moving faster and in an established direction.

Tumor detection is a key point as early stage breast cancer patients have a really high survival rate (over 80%). We are doing our best to develop these new techniques with the aim of making early accurate detection of breast cancer a better reality each day. This would be impossible without the dedicated volunteers that take part in our studies and the funding we receive from the local health authorities, The Norwegian Research Council, and the Norwegian Cancer Society.