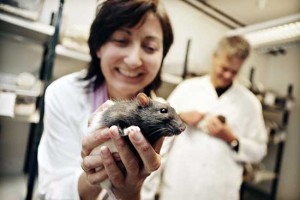 May-Britt and Edvard Moser have spent nearly 20 years building a laboratory and a team of neuroscientists to explore the workings of the brain. Much of their research is conducted using laboratory rats. Photo: Geir Mogen, NTNU

There’s a proverb – the origins of which are hotly disputed – that says “It takes a village to raise a child.” You could almost say the same thing about groundbreaking discoveries in neuroscience, if NTNU’s Kavli Institute for Systems Neuroscience/Centre for Neural Computation (KI/CNC) is any example.

Nobel laureates May-Britt and Edvard Moser have spent the last two decades building a village of neuroscientists, molecular biologists, physicists and anatomists – whose different and complementary skills are key to the ultimate goal of unlocking the secrets of how the brain actually computes.

The pioneering discovery of grid cells in the brain in 2005 by the Mosers and three of their graduate students shook the world of neuroscience to the very core – and is the reason the Mosers won the 2014 Nobel Prize in Physiology or Medicine with their former mentor, John O’Keefe. Their subsequent research showed how place and grid cells make it possible to determine position and to navigate.

Read more – A village of neuroscientists in Gemini

Financial support to study complications after abortion in Malawi