Waves in your brain make smells stick to your memories and inner maps.

When I was a child I used to sit in my grandfather’s workshop, playing with wood shavings. Freshly shaven wood has a distinct smell of childhood happiness, and whenever I get a whiff of that scent my brain immediately conjures up images of my grandfather at his working bench, the heat from the fireplace and the dog next to it.

Researchers at the Kavli Institute for Systems Neuroscience have recently discovered the process behind this phenomenon. The brain, it turns out, connects smells to memories through an associative process where neural networks are linked through synchronised brain waves of 20-40 Hz. The results are published in this week´s edition of Nature. 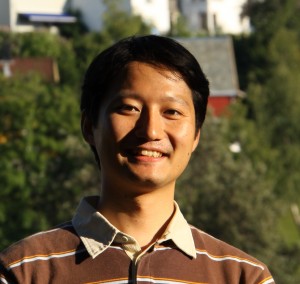 – We all know that smell is connected to memories, Kei Igarashi, lead author, explains.– We know that neurons in different brain regions need to oscillate in synchrony for these regions to speak effectively to each other. Still, the relationship between interregional coupling and formation of memory traces has remained poorly understood. So we designed a task to investigate how odour-place representation evolved in the entorhinal and hippocampal region, to figure out whether learning depends on coupling of oscillatory networks.

Smell guides the way in maze
The researchers designed a maze for rats, where a rat would see a hole to poke its nose into. When poking into the hole, the rat was presented with one of two alternative smells. One smell told the rat that food would be found in the left food cup behind the rat. The other smell told it that there was food in the right cup. The rat would soon learn which smell would lead to a reward where. After three weeks of training, the rats chose correctly on more than 85% of the trials. In order to see what happened inside the brain during acquisition, 16–20 electrode pairs were inserted in the hippocampus and in different areas of the entorhinal cortex.

After the associations between smell and place were well established, the researchers could see a pattern of brain wave activity (the electrical signal from a large number of neurons) during retrieval.

Coherent brain activity evolves with learning
– Immediately after the rat is exposed to the smell there is a burst in activity of 20–40 Hz waves in a specific connection between an area in the entorhinal cortex, lateral entorhinal cortex (LEC), and an area in the hippocampus, distal CA1 (dCA1), while a similar strong response was not observed in other connections, Igarashi explains.

This coherence of 20–40 Hz activity in the LEC and dCA1 evolved in parallel with learning, with little coherence between these areas before training started. By the time the learning period was over, cells were phase locked to the oscillation and a large portion of the cells responded specifically to one or the other of the smell-odour pairs. 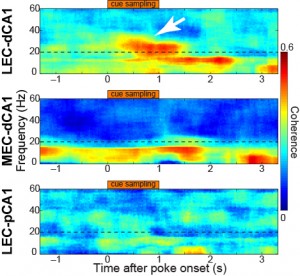 Long distance communication in brain mediated by waves
– This is not the first time we observe that the brain uses synchronised wave activity to establish network connections, Edvard Moser, director of the Kavli Institute for Systems Neuroscience says. – Both during encoding and retrieval of declarative memories there is an interaction between these areas mediated through gamma and theta oscillations. However, this is the first study to relate the development of a specific band of oscillations to memory performance in the hippocampus. Together, the evidence is now piling up and pointing in the direction of cortical oscillations as a general mechanism for mediating interactions among functionally specialised neurons in distributed brain circuits.

So, there you have it – the signals from your nose translate and connect to memories in an orchestrated symphony of signals in your head. Each of these memories connects to a location, pinpointed on your inner map. So when you feel a wave of reminiscence triggered by a fragrance, think about how waves created this connection in the first place.