A leaky heart valve, termed valvular regurgitation, causes some of the blood to flow in the wrong direction. It is one of two major features in valvular heart disease. The patient’s symptoms and prognosis depend heavily on the amount of leakage, which usually is determined by ultrasound.At the Centre of Innovative Ultrasound Solutions (CIUS), we are developing a new, real-time, automated technique to measure the regurgitant flow.

The prevalence of moderate-to severe valvular heart disease is around 2.5 % in developed countries, with valvular regurgitation accounting for almost half of the total figures. Here, it is strongly associated with age, and due to an ageing population, the future prevalence of such disease is likely to increase substantially, arguably turning into “the next cardiac epidemic”. In developing countries, rheumatic fever is still a major cause of valvular heart disease, affecting all age groups.

To some degree, proper medical treatment may decrease the severity of valvular regurgitation secondary to heart failure. However, no medication has proven to prevent or slow down the development of primary valvular regurgitation. Thus, valve repair or replacement are the only definite treatment options for most patients with such disease, traditionally being performed through open heart surgery. Lately, there has also been a substantial increase in the use of less mutilating catheter-based techniques, favourably entailing shorter hospital stays and quicker recovery. Nevertheless, any form of valve repair or replacement impose a significant risk to the patient, and is generally only recommended in severe valve disease. Hence, the severity assessment of the valve disorder is fundamental.

Examination of the heart by ultrasound, called echocardiography, is fairly cheap, readily accessible and widely used throughout the developed world, extending increasingly in developing countries as well. However, the echocardiographic assessment of the severity in valvular regurgitation is rather complex. Hence, the current American and European recommendations on this field are quite extensive and include numerous parameters.

Traditionally, the quantitative parts of the assessment rely on the assumptions of a constant sized circular regurgitant orifice (the opening causing the leak). However, the shape of the regurgitant orifice is often highly irregular and its size dynamically changing. This frequently leads to a, at best, modest fit between the assumptions and the true anatomy of the orifice, making these quantitative parameters somewhat unreliable. The addition of another spatial dimension (3D) improves the anatomic fit, resulting in more accurate estimations when compared to measurements by cardiac magnetic resonance imaging (MRI). However, the dynamically altered size of the regurgitant orifice is not accounted for, and remains an unsolved issue. Furthermore, all these quantitative measurements rely on a method which is influenced by settings defined by the individual user, in addition to being vulnerable to angle deviation between the ultrasound beam and the valve leak. Finally, the measurements are only valid in regurgitations with one single orifice, whereas in real-life, several orifices are quite frequently seen. Altogether, this necessitates inclusion of multiple additional parameters to form a comprehensive assessment of valvular regurgitation. In total, this imposes a quite cumbersome and sometimes difficult evaluation, heavily dependent on the examiner’s knowledge and experience. 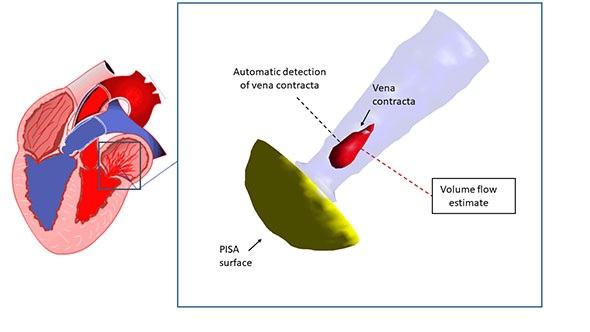 On one hand, the numerous recommended parameters in the severity assessment of valvular regurgitation could be regarded as a sign of the complexity of these valve disorders. Undoubtedly, it is also a consequence of the lack of a widely reliable quantitative approach. For some years, the medical ultrasound group at NTNU has worked on methods to improve the quantitative measurements in valvular regurgitation.

Through step-by-step refinements, the group has developed a method which is less user-dependent and less sensitive to many of the limitations of the previously established techniques. Due to recent developments in hardware and software, increased spatial and temporal resolution may be achieved, enabling the method to reach its full potential. Consequently, our goal is development of a new, real-time, automated technique for quantification of regurgitant flow. For clinical validation, we will apply the new method in 80 patients with moderate-to-severe regurgitation of the left sided heart valves. Comparisons will be made both with regurgitant flow measured by cardiac MRI and an expert’s comprehensive echocardiographic assessment.

Pinktober files: Can the treatment of triple negative breast cancer be improved?

Cyclodextrin, a sugar with promising potential for treatment...

Making handheld ultrasound easier to use