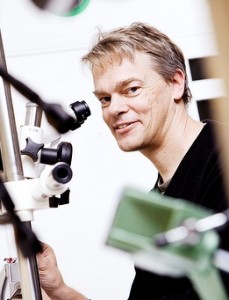 Moser receives 2.5M Euro grant to investigate the functional organization of cortical circuits. Once again, Professor Edvard Moser at the Kavli Institute for Systems Neurosceince receives an ERC Advanced Investigator Grant. The principal objective of the new research project is to decipher the principles of network organization in a high-end cortical system.

– The new project – GRIDCODE – will stand on the shoulders of the previous ERC funded project CIRCUIT, Professor Edvard Moser explains.

From circuit anatomy to cortical decoding

CIRCUIT was funded after the first call of the Advanced Investigator scheme. The goal back then was to establish the intrinsic anatomy of the grid-cell system, the existence of grid modules, the relationship between components of the space network, and the role of plasticity and oscillations in the formation of the grid-cell code.

– I guess we can say that we have succeeded, Moser says. – To reach these objectives, my colleagues and I have pioneered the introduction of optogenetic tools to in vivo recordings in the hippocampus and medial entorhinal cortex. Through our work we discovered that inhibitory connectivity is a major element of the mechanism for grid cells. We also found that the grid map is organized into interleaved but functionally independent modules, and that hippocampal neurons receive input from all major functional cell types of the medial entorhinal cortex.

Collectively these findings, and other discoveries from collaborative EU projects Moser has coordinated, have advanced our understanding of how space is represented in the mammalian brain substantially. GRIDCODE is an extension of these previous findings, but also much more, Moser explains.

– The project breaks new ground by using grid cells as an access ramp to understanding the functional organization of a cortical circuit. – We will take advantage of the reliability and accessibility of the grid cells; use them to determine the mechanisms and functions of an intrinsically generated modular cortical representation of the external world. To achieve this, we will have to develop new methods.

Neural-circuit analyses in high-end cortices face at least two major road blocks. One is the general lack of experimental model systems where neural activity can be related unequivocally to particular types of experience. The second is the absence of experimental methods for untangling the functional contribution of the elements of a neural circuit.

– In the GRIDCODE project, I intend to exploit recent advances in our understanding of neural maps of space, Moser says. – We have developed the experimental model system ourselves. Before 2005 our understanding of neural coding in high-end association cortices was hampered by a striking scarcity of reliable and easily measurable correlates between neural activity and behaviour.  We opened up a path in this terra incognita when my group discovered the grid cells in the entorhinal cortex. The grid cells proved to be a key element of the brain’s metric for local space. Because the activity matrix of the grid cells is generated in the brain, far away from specific sensory inputs, grid cells provide us with unprecedented access to algorithms of neural coding in high-end cortices.

New technologies allow Moser and his scientists for the first time to read out computational processes in entangled neural circuits of behaving animals. A whole spectrum of technologies is available in the Moser lab thanks to a recent large-scale infrastructure grant, NORBRAIN, which enabled a major expansion of existing technologies as well as the implementation and development of new methods in their 3700 m2 of new laboratory premises.

The aim of GRIDCODE is to use these two advantages, the model system and the range of new technologies, to pioneer the extraction of the neural-circuit mechanisms underlying an accessible mammalian cognitive function – the neural mapping of local space.