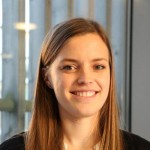 Could there be a better day to write my first blog? Especially when it’s a “pink” one! The 1st of October marks the beginning of Breast cancer awareness month. This is a month that has the aim to improve knowledge among the population, show compassion for breast cancer patients, and raise funds for breast cancer research.

In the coming days and weeks, the streets will be filled with pink ribbons, balloons, and accessories, and a variety of pink activities will be organized throughout the country. With this blog I hope to teach you something you didn’t know about breast cancer. I also want to show you what research funding can contribute to.

Breast cancer affects many lives, not only the people who are diagnosed. It is the most common cancer among women in Norway, and just today eight women will be diagnosed with breast cancer. Luckily, due to early detection and improved treatment, 90 % of women with breast cancer are still alive 5 year after the diagnosis. But no two tumors are exactly alike, which makes it hard to predict who will be in the 10 % that respond poorly to the current treatments and have short survival times. Also, even with a good response to treatment the patient can experience post treatment adverse effects and a poorer quality of life.

We wish to improve this.

To provide targeted and optimal treatment that has been tailored to each patient, we first have to learn as much as possible about the cancers’ properties and potential weaknesses. Some important targets are already well established in the clinic, like drugs that attack cancer cells that depend on the hormones estrogen or progesterone to grow. But there are still some cancers that don’t have established targets and researchers are working hard to uncover new ways to treat them.

Important differences can be hidden in cancer metabolism

One of the aims of the MR Cancer group has been to reveal potential treatment targets by exploring cancer metabolism.

Cancer cells grow and divide uncontrollably, which increases the need for energy and building blocks compared to normal cells. This can be observed when MR spectroscopy is used to study which small molecules, called metabolites, are present in tissue samples. The result of such an experiment is called a ‘spectrum’, where the peaks originate from different metabolites (see figure). Some of the metabolites are more common than others, such as glucose and lactate. Others are perhaps less known, such as glycerophosphocholine and glutathione, but are still important to study. The metabolites can tell us something about which processes are ongoing at the time the sample is taken.

Previous studies have shown that the cancer tissue’s metabolic fingerprint, meaning the metabolites present, is related to the tumor grade (how aggressive the cancer is), potential for metastasis, and 5 year survival.

By studying the metabolic fingerprint, it is possible to increase the knowledge about which types of breast cancer exist, how aggressive they are, and at the same time look for more biological markers that can identify new targets for treatment.

The figure shows some of the metabolites we can observe by performing MR spectroscopy on breast cancer tissue.

In the Oslo2-study, a large-scale breast cancer study at the Oslo University Hospital, sample material from 228 patients has been sent to Trondheim and analyzed by MR spectroscopy. Based on the samples’ metabolic fingerprints we have identified three new subgroups of breast cancer. These three groups displayed differences in metabolism; understanding what makes them different helps us to identify more precise drug targets specific for each of the three groups.

The unique feature of this study is that the sample materials from the same group of patients have been analyzed with multiple methods. Both the expression of genes and level of breast cancer related proteins have been analyzed. This gives us the possibility to look for new relationships between genes, proteins, and metabolites in breast cancer. By combining the levels of data, we saw that one group in particular expressed big differences in genes and proteins compared to the two other groups. 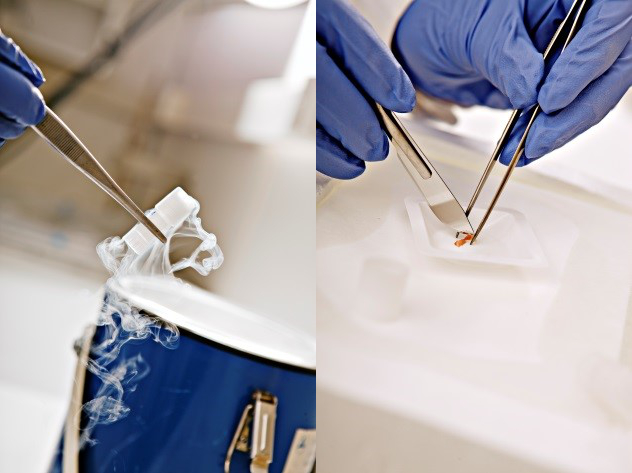 Tissue samples are stored in liquid nitrogen prior to MR spectroscopy. The samples are kept frozen while they are cut to fit the sample tubes. Photo: Geir Mogen/NTNU.

Based on this, we suspect that this group has a more aggressive cancer type, and would therefore benefit from a different type of treatment than the two other groups.

We will soon acquire follow-up data from the patients in this study, which will provide us with new information on survival and relapse. Based on our metabolic findings, the hypothesis is that the patient survival is different depending on which metabolic subgroup they belong to. If this hypothesis is correct, it means that the metabolic classification can indicate which patients need extra follow-up, and possibly more intensive treatment to get well.

Finally: Why not wear something pink today to show your appreciation for Breast cancer awareness month?

The research is financed by the K.G. Jebsen Center for Breast Cancer Research.