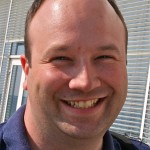 Most women give birth naturally and without problems, but sometimes labour becomes prolonged. Common causes are weak contractions, the position of the baby, or that the baby is too large for the mother’s pelvis. Traditionally the midwives and doctors assess the progression of labour using their hands. Ultrasound is mostly used for check-ups during pregnancy, and seldom used during labour itself.

We therefore wished to investigate whether ultrasound could be a useful tool during prolonged labour.

A hundred-and-ten first-time mothers at Stavanger University Hospital where examined using ultrasound during labour in the period 2009-2010. We studied whether the level and rotation of the baby’s head in the pelvis could predict the probability of normal delivery or caesarean. Ultrasound was compared with traditional clinical examinations.

In the first study we found that there was a great chance of caesarean if labour stopped when the head was high up in the birth canal, but if the head had passed the mid-section of the canal (the tightest part), 90% of the women had a normal delivery. Ultrasound could predict the progression of labour better than traditional clinical examination.

In the second study, two and three dimensional (2D vs. 3D) ultrasound techniques were compared. The results showed that 2D and 3D were equally good techniques. 3D examinations, however, are more complicated and the equipment more expensive, and therefore 2D could be favoured as a simple method giving good information directly in the delivery room.

The rotation of the baby’s head in the pelvis during labour was estimated using ultrasound in the third study. Rotation is necessary for the baby to pass through the birth canal. The study showed that the rotation of the head alone could not predict caesarean vs. vaginal birth. This is probably because the head has to rotate no matter the outcome.

We studied four suggested ultrasound methods to measure the head’s level. The results showed that they corresponded well, and that all four were better than standard clinical examination.

Erik Andreas Torkildsen’s viva on the subject takes place on 20. September at 12.14, at Stavanger University Hospital. The trial lecture “The control of labour – contemporary science” will be held at 10.15 the same day.

The project has been a collaboration between the Women’s clinic in Stavanger and the National Centre for Foetal Medicine, St. Olavs Hospital, Trondheim.