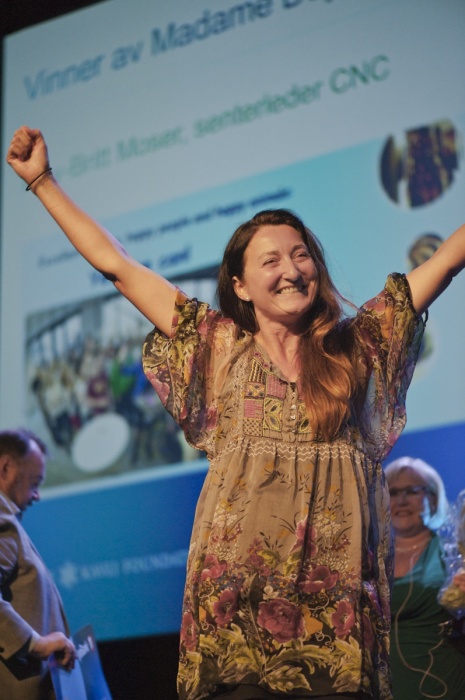 May-Britt Moser was awarded the Madame Beyer award on Wednesday 18 September, at an annual regional business conference arranged by the Trondheim Chamber of Commerce.

The award is named after the late Madam Beyer of Trondheim, who in the 18th century chose to become a business leader herself after she was widowed. Beyer grew to be a very successful business leader and was known for being extremely generous and hospitable.

The Madam Beyer award recognizes brilliant female business leaders, in an era when they remain in a minority. The award is meant to be an inspiration for female leaders, and a recognition of superb leadership.

“I am absolutely overwhelmed, and shocked, that I have been awarded this honour,” May-Britt Moser said. “I do not feel like a regular business leader, so this is huge for me. What is special about my position is that I have to fill two roles, both as a business leader, and also as a leading scientist. I cannot take either of these roles lightly, nor do I want to.”

The jury recognized Moser’s brilliant scientific achievements, as well as her high ethical standards in her responsibility towards both her employees and research animals. They also acknowledged her consistent focus on team work and community spirit. Moser’s continuous effort to make the research centre world class at every level, not just scientifically, is admirable and an inspiration to other leaders.