Last week May-Britt and Edvard Moser received the Louisa Gross Horwitz Prize. In addition to an award ceremony and dinner, a lecture series, Louisa Gross Horwitz Prize Lectures, was part of the programme. To introduce May-Britt and Edvard Moser, Nobel Laureate Eric Kandel from Columbia University gave this inspiring speech about the awards, and about the development of Norwegian creativity from Munch to Moser:

Good morning everyone and welcome to the first of two Louisa Gross Horwitz Prize Lectures to be given on the Medical School campus.

The Louisa Gross Horwitz Prize is Columbia’s highest recognition in the biological sciences. This year’s award, the 46th Gross Horwitz Prize, goes to John O’Keefe, May-Britt Moser and Edvard Moser. Their award is particularly special because it is so richly over-determined. It is noteworthy not simply for one but for three very different reasons.

To begin with, it celebrates, as do all the Louisa Gross Horwitz awards, science at its best. As you will learn from the lectures, of Edvard and May-Britt Moser, they and John O’Keefe have provided us with a new understanding of how information about space is represented in the brain.

Second, the Award celebrates an extraordinary collaboration between May-Britt and Edvard—one which has brought together not only their combined hippocampal-based, cognitive resources but also their amygdala-based, emotional and affective resources. Theirs is a truly consummate collaboration.

Finally, this award celebrates an extraordinary change in how we, the American academic community, view Norwegian creativity.  Until the 1940s, Norway was best known to Americans for its great expressionist painters such as Edvard Munch, and expressionist dramatists such as Henrik Ibsen. Munch in particular is well known to all of us because his images of modern existential anxiety haunt our imagination. But Munch was also interested in emotions other than fear – such as the emotions of affection and love, and he depicted these as well .

But this limited view of Norway’s creative energy changed in the 1950s when Norway began to focus on brain science and in so doing developed a creative obsession with the hippocampus. This obsession began with the great Norwegian anatomist and neurologist Alf Brodal who, in 1947, wrote a highly influential article entitled “The Hippocampus and the Sense of Smell.” Here he pointed out that the hippocampus, which was considered part of the rhinencephalon—the smell brain—was not the cortical receiving area for olfaction, as had been believed. It must therefore, Brodal argued, have some other function. Ten years later the British-Canadian psychologist, Brenda Milner, made the remarkable discovery that the hippocampus was critical for the storage of memory, including memory for space.

Norway returned to the hippocampus in the 1960s and 1970s when Brodal’s disciple, Per Anderson, made two major contributions. First, Anderson defined the now classical trisynaptic pathway through which the hippocampus processes information. Second, it was in Anderson’s laboratory that Tim Bliss and Terje Lømo discovered that these pathways undergo, a long-lasting form of synaptic plasticity – long-term potentiation – now thought to be important for storing memories in the hippocampus.

May-Britt and Edvard are direct descendants of this distinguished Norwegian tradition and its obsession with the hippocampus. They attended the University of Oslo where they met and married in 1985, while they were still undergraduates. This event led to a updating of Munch’s famous painting 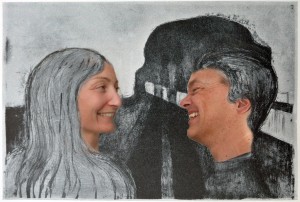 It was also then, that they decided to work on the brain. They therefore joined Per Anderson’s lab, where they received their PhD. They then obtained postdoctoral training, first with Richard Morris at the University of Edinburgh and then at University College London with John O’Keefe whose discovery of place cells we honor jointly with the discoveries of the Mosers.

May-Britt and Edvard, it is my pleasure to welcome both of you once again to Columbia University.

Although they will give separate lectures, as in their life, the strands of their research are inseparable. I will introduce Edvard now to give the first of the two lectures on Grid Cells and the Neuronal Map of Space. At 3:30 PM this afternoon we will hear from May-Britt’s Lecture when she will talk about the Hippocampus, Space and Memory.

Are you at PhD student or Supervisor within Cardiovascular Disease in Norway?

Inside out. New Images and imaginations of the...

Shutting off blood supply to an extremity to...